EP027: Sharlene Lopez on identity, racism and otherisation in the midst of motherhood

We have four nationalities in our immediate family, and it often makes for interesting conversations when people ask “where are you from” because we were all born in different countries. Today’s guest has four nationalities wrapped up in her beautiful being. Earlier this month she decided to step into one of her nationalities more fully, for a month, to see how it feels.

Sharlene Lopez was born to a Scottish mother of Irish descent and an Iraqui father, adopted by a loving British family and educated in Catholic private schools. To say she’s inhabits the nexus of many influences doesn’t begin to cover it.

A few years ago she and her husband decided to leave London in search of tranquility and peace in a beautiful British village. Accustomed to being in the big city where there’s so much variety that no one is really “different,” Sharlene realised that her beautiful Middle Eastern features set her apart in her new home. She often felt conspicuous and at times a bit uneasy. That’s never been truer than right now.

Troubled by the racism she’s always seen in British society and feeling the plight of immigrants to her country, Sharlene recently decided to explore her “otherness” by, as she puts it, “trying on” one of her identities. She chose to embrace her Iraqui heritage and live for a month as an immigrant Iraqui muslim woman. She learned to wear a hijab and abaya and has been experiencing life very differently as she runs her business, parents her kids and shows up in her relationship and her community.

In today’s conversation we dive into the unexpected dilemmas Sharlene has faced this month, her challenges in professional and personal settings, and whether the Western world’s thinking about oppression of Muslim women is backwards. Sharlene shares what she’s thinking about her head covering mid-way through her “identity experiment” and invites us to share her as she continues on this quest to walk a mile in her Muslim immigrant sisters’ shoes.

It’s a fascinating conversation you won’t want to miss. Once you’ve had a chance to listen, be sure to visit our Facebook group to join in a follow-up conversation with Sharlene. I’d love to hear what you think and to see you getting involved in the conversation.

You can watch the video of our call here. 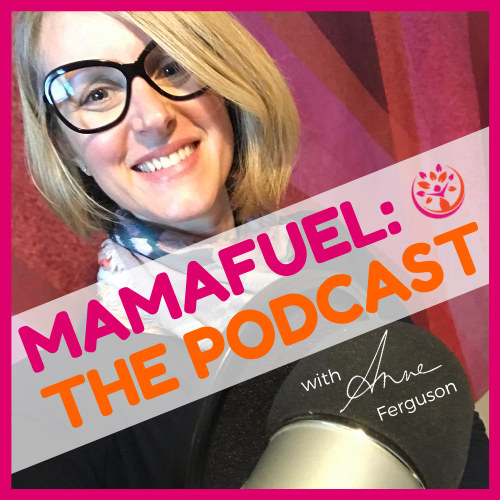 We need to have more brave, honest conversations about the challenges, surprises, frustrations, pains and celebrations of life as women and as mothers. We need to talk about it all without shame, blame or guilt. So we all know we’re normal. That our struggles aren’t ours alone. That we’re seen and held. That’s why I created MamaFuel: The Podcast — to make sure there’s no mama left behind.

If you love listening to MamaFuel: The Podcast, THANK YOU, BEAUTIFUL!! It makes me so happy to know that the conversations I share are reaching your precious ears.

I’d be thrilled if you’d leave me a review, so the podcast can raise even more mamas around the world. Don’t know how to do it? No worries.

Once you’ve done that, be sure to join The Mamafuel's Virtual Village on Facebook and tell me that you’ve left a review, so I can have a look and thank you. The Virtual Village is where we take the conversations in the podcast episodes even further, and I’d love you to be part of the discussion!

Tired of feeling like you're being a bitchy mother?

Tired of feeling like you're being a bitchy mother?

Click here for five ways to put yourself first and break through your overwhelm.